George Bancroft and a good story seem to go hand in hand. For this popular star has been the dominant figure of numerous suspense-filled action dramas that command attention. Perhaps it is the Bancroft personality that gives colour and interest to each story. Or maybe its his sincerity and force of character that are strikingly evident in his portrayals. Wheteer it is, each new George Bancroft picure is pulsing, human, vital drama that compels attention and interest.

Bancroft's new starring vehicle, "Derelict," is a notable example. Here is a vigorous, action-romance set against the surging, tempestous background of the sea. The stosphere os the picture, so beautifully and imaginately built up by the intelligent use of the camera, imparts the feeling of stern adventure and hard, passionate living. Each scene, as it unfolds before the eye, maintains the steady building up of a story and character, culminating in a dramatic climax of unusual and significant effect. "Derelict" is apicture to delight all George Bancroft admirers, a picture to thrill the most blase of audiences.

The photography of "Derelict" is outstanding. Photographed mostly on location, the subtle, pervading magic of the tropics has been caught with a skiful (sic) and understanding eye. Too, the storm scenes, daring in their conception and completely thrilling to watch, are tremendously effective sequences the like of which are seldom seen on the audible screen. 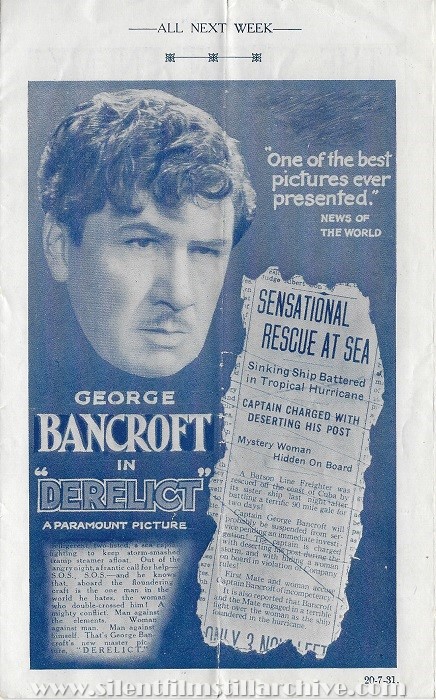 "One of the best pictures ever presented." NEWS OF THE WORLD

A Batson Line Freighter was rescued off the coast of Cuba by its sister ship last night after battling a terrific 90 mile gale for two days!

Captain George Bancroft will probably be suspended from service pending an immediate investigation! The captain is charged with deserting his post during the storm, and with hiding a woman on board in violation of Company rules!

It is also reported that Bancroft and the Mate engaged in a terrible fight over the woman as the ship foundered in the hurricane. 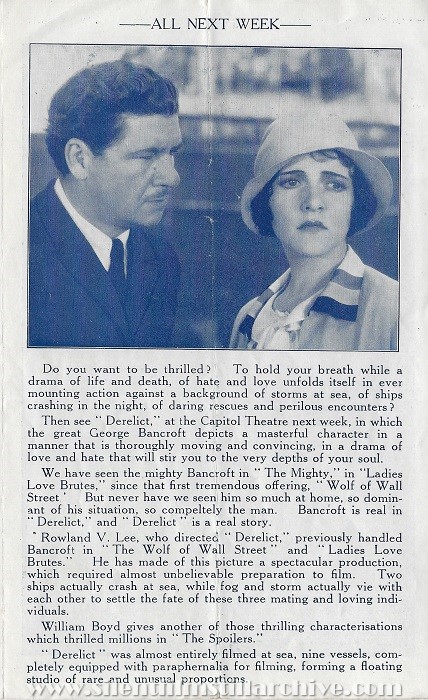 Do you want to be thrilled? To hold your breath while a drama of life and death, of hate and love undolds itself in ever mounting action against a background of storms at sea, of ships crashing in the night, of daring rescues and perilous encounters?

Then see "Derelict," at the Capitol Theatre next week, in which the great George Bancroft depicts a masterful character in a manner that is thoroughly moving and convincing, in a drama of loe and hate that will stir you to the very depths of your soul.

We have seen the mighty Bancroft in "The Mighty," in "Ladies Love Brutes," since that first tremendo, "Wolf of Wall Street." But never have we seen him so much at home, so dominant of his situation,, so completely the man. Bancroft is real in "Derelict," and "Derelict" is a real story.

Rowland V. Lee, who directed "Derelict," previously handled Bancroft in "The Wolf of Wall Street" and "Ladies Love Brutes." He has made this picture a spectacular production, which required almost unbelievable preparation to film. Two ships actually crash at sea, while fog and storm actually vie with each other to ettle the fate of these three mating and loving individuals.

William Boyd gives another of those thrilling characterisations which thrilled millions in "The Spoilers." 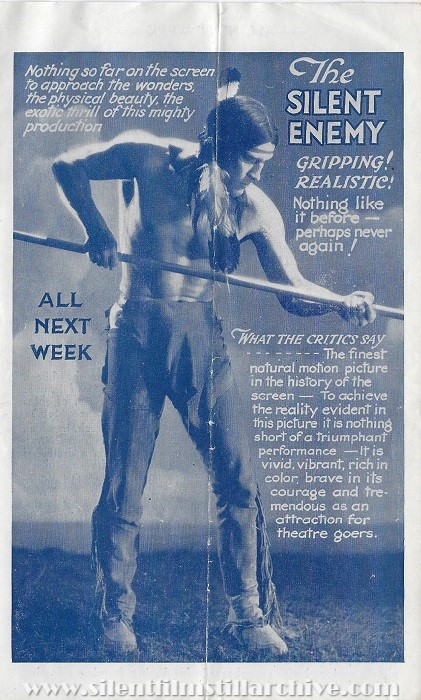 Nothing so far on the screen to approach the wonders, the physical beauty, the exotic thrill of this mighty production

WHAT THE CRITICS SAY --------
The finest natural motion picture is the history of the screen -- To achieve the reality evident in this picture it is nothing short of a triumphant performance -- it is vivid, vibrant, rich in color, brave in its courage and tremendous as an attraction for theatre goers. 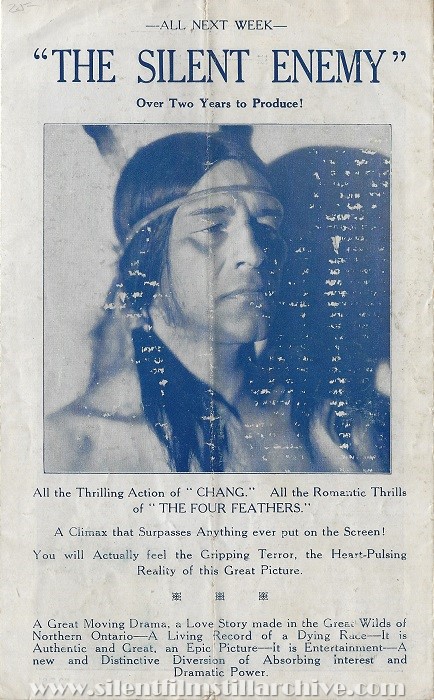 Over Two Years to Produce!

All the Thrilling Action of "CHANG."  Alll the Romantic Thrills of "THE FOUR FEATHERS."

A Climax that Surpasses Anything ever put on the Screen!

You will Actually feel the Gripping Terror, the Heart-Pulsing Reality of this Great Picture.

A Great Moving Drama, a Love Story made in the Great Wilds of Northern Ontario -- A Living Record of a Dying Race -- It is Authentic and Great, an Epic Picture -- it is Entertainment -- A new and Distinctive Diversion of Absorbing Interest and Dramatic Power.

More Information on the Capitol Theatre...

The Capitol Theatre at CinemaTreasures.com